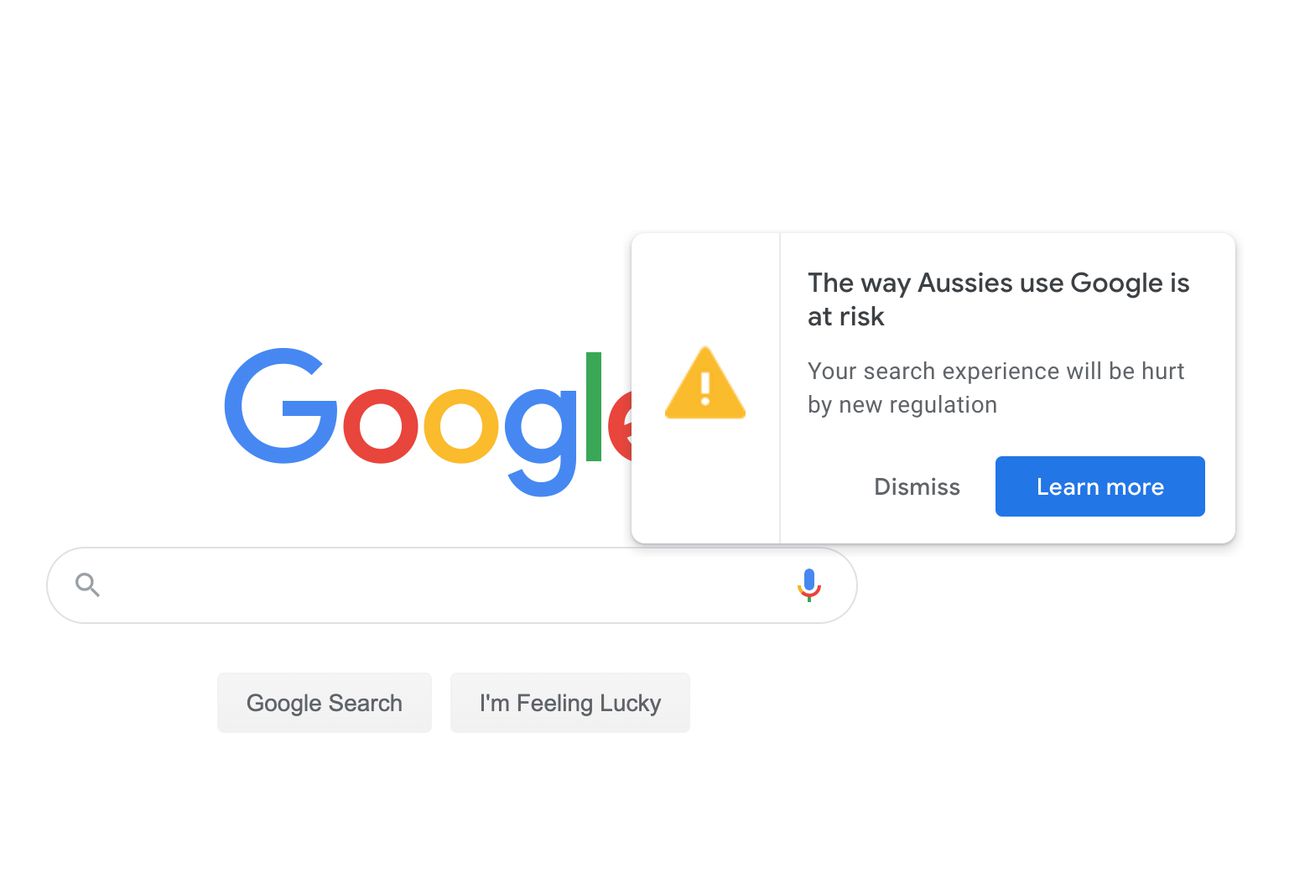 Google has published an open letter about a newly proposed government regulation that would compel it to pay media outlets for news content. Australians visiting their local Google homepage are presented with an ominous pop-up which warns that “the way Aussies use Google is at risk” and “their search experience will be hurt by new regulation.” It’s a bold lobbying move that puts Google’s arguments against the change in front of millions of Australians.

Australia’s proposed News Media Bargaining Code law, which is currently in draft and targets Facebook alongside Google, follows a 2019 inquiry in Australia that found the tech giant to be taking a disproportionately large share of online advertising revenue, even though much of their content came from media organizations. Since then, the news and media industry have been hit hard by the pandemic. The Guardian reports that over a hundred local newspapers in Australia have had to lay off journalists and either shut down or stop printing as advertising revenue has fallen.

“We need to let you know about new Government regulation,” reads the letter linked from the pop-up from Google Australia’s Managing Director Mel Silva. Silva argues that the proposed regulation will lead to a “dramatically worse Google Search and YouTube, could lead to your data being handed over to big news businesses, and would put the free services you use at risk in Australia.”

Google’s arguments include a claim that the law would give an “unfair advantage” to news publishers by giving them information they could use to boost their rankings compared to the competition. The proposed law would mean tech companies have to advise media organization about algorithm changes affecting their rankings. But only larger media companies are guaranteed to get this information. The Guardian reports that eligible media companies must meet various requirements including having revenues exceeding $150,000 a year, and must have a certain focus on the Australian market. Google also says that the law could put user data at risk.

The letter has received pushback from the Australian Competition and Consumer Commission (ACCC), the competition watchdog behind the proposed law. “Google will not be required to share any additional user data with Australian news businesses unless it chooses to do so,” the ACCC said. It added that the code would not require Google to charge for its services like Google Search and YouTube.

Google’s letter says that the company has previously offered to pay for news content as part of an initiative announced back in June. Under the plans, Google partnered with publishers in Germany, Australia, and Brazil to pay for news content for a “new news experience” due to launch later this year. However, The Financial Times reports that the plans have since been paused in Australia as a result of the proposed law. The initiatives in Brazil and Germany are reportedly not affected. Google did not respond to The Verge’s question about the status of the initiative.

“We’re going to do everything we possibly can to get this proposal changed,” Google’s letter concludes. The company hasn’t been afraid to rally support from its millions of users in the past. In 2018, it showed notices on YouTube about the EU’s copyright proposal.

Google has also withdrawn services entirely in certain countries due to new regulations. Back in 2014, it shut down its Google News service in Spain after it was asked to pay for the news snippets it displayed.

This isn’t the first time Google has publicly responded to the proposed Australian regulations. Back in May it published a blog post titled “A fact-based discussion about news online” in which it said that it didn’t run ads on Google News or the news results tab on Google Search, and that news-related queries make up a small percentage of total Google searches in the country. It also said that it drives millions of page views to Australian news publishers.